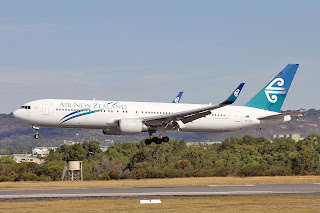 Air New Zealand B767-319 (ER) W ZK-NCK msn 26971 operated the airlines last scheduled B767-300 service operating from Auckland to Perth today, with the commencement of B777 aircraft being scheduled to operate on this routing effective from Monday 3rd September 2012.

Today's flight began at 14.42hrs (NZST) when ZK-NCK departed ex: Auckland for the journey west to Perth, operating as flight 'NZ175' with an elapsed flight time of 7hrs.13mins, arriving into Perth at 17.52hrs (WST). The outbound return flight 'NZ176' to Auckland departed Perth at 19.57hrs (WST) for the 5hrs.49mins flight back to NZ, arriving at 05.46hrs +1 (NZST) thus bringing to a close this chapter of Air New Zealand's flights to Western Australia.

Tommorrow heralds another new chapter in the airline's future plans for Perth and beyond, as we look forward to seeing more of the Kiwi 777s in Perth.