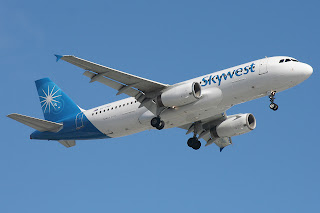 Since February 2012, Skywest Airlines has been providing air services between Perth and Derby (Curtin) and has now been granted an additional 1 year contract to continue servicing the region effective from 19th August 2012. Skywest use mainly Airbus A320 VH-FNP msn 0429 to service this route operating as flight 'XR241/242', the airline's other mainstay Fokker 100 jets, have also occasionally operated on the route.﻿
Posted by Greg Wood at 7:00:00 PM