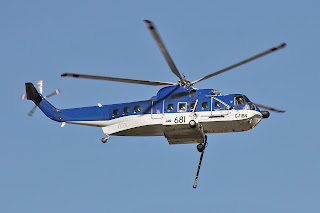 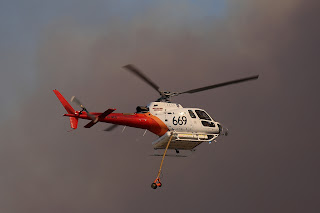 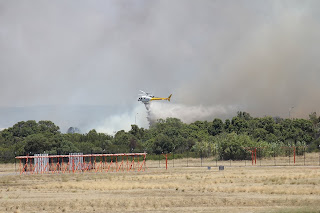 A bushfire at Perth Airport yesterday which started around 12.30pm burnt out 50 hectacres of bushland and closed Dunreath Drive, and reduced traffic flow on nearby Tonkin Hwy, Leach Hwy, & Kewdale Roads to a crawl. Horrie Miller Drive into Perth Airport's Intl terminal was also severley interrupted.

17 fire fighting appliances were used to quell the fire which is now contained, however parts of bushland remain smouldering this morning as mopping up continues. 4 fixed winged aircraft from Jandakot Airport, along with Helitak Squirrels, & Sikorsky S-61 were also used to fight the fire (see photos above).

Perth Airport's new spectator viewing area was also evacuted of people who still remained up there as the blaze approached.

Police are investigating the cause of the fire.
Posted by Greg Wood at 6:37:00 AM