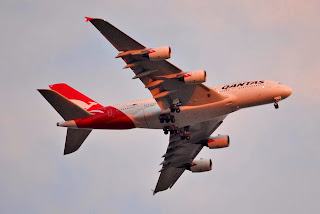 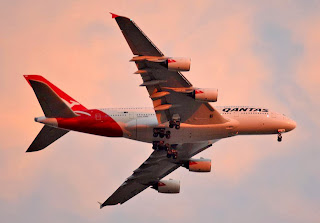 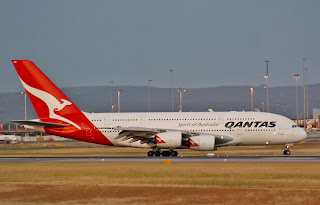 The aircraft's flight path saw the A380 fly West over Two Rocks and then fly south over the Indian Ocean presumably dumping fuel to reduce her landing weight, before then turning East over Joondalup area for re-positioning onto RWY 21 for landing.

These spectacular two images above taken by Laura Collier flying overhead with wheels down on finals for RWY21. This is only the second Qantas A380 to have visited Perth, Nancy Bird Walton VH-OQA msn 14 being the previous aircraft to do so.

After off loading the sick passenger and accompanying luggage, the aircraft was then towed to ITB bay 56 for re-fueling.  The aircraft departed Perth at 21.35hrs (WST) off RWY 03 for Dubai continuing the journey as flight QF1

Sources allegedly report the passenger onboard had an allergic reaction to peanuts served in the dinner salad served on board the aircraft, this we can now confirm thanks to correspondence received by a family relative responding to this report on 18th Nov (see comments below)


In any case we wish the passenger a speedy recovery what ever their condition.
﻿
﻿
Update: QF1 VH-OQB landed in Dubai (OMDB) at 03.43hrs (LT) Sunday 17th November, after a flight time of 10hrs.17mins ex: Perth.
Special thanks to our team of people at Perth Airport Spotters Blog & our FB page who reported all the 'above details & images' you know who you are, so thankyou.
Note: Over 1300 worldwide views in 48hrs terrific effort! & thanks for following us.