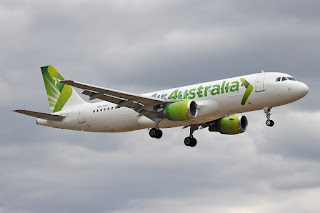 Air Australia formerly Strategic Airlines was placed into voluntary adminstration after the airline was unable to pay its fuel & other bills.

Administrators KordaMentha, representating the airline have been in discussion with airline's Qantas, Jetstar, Virgin Australia & Hawaiian Airlines seeking assistance in returning stranded passengers from overseas. Hawaiian Airlines is offering a $300 (approx) fare to return those passengers to Australia, with other airlines expected to offer similiar.

The airline continued to operate a thrice weekly service from Perth to Derby (Curtin) operating as a fly in / fly out charter operator to the mining industry. The last flight operating on this route operated on Wednesday 15th February 2012 by A320-212 VH-YQB msn 279 departed at 06.10hrs & returned to Perth at 11.57hrs its last services operated as 'VC501/502'.
Posted by Greg Wood at 8:48:00 AM