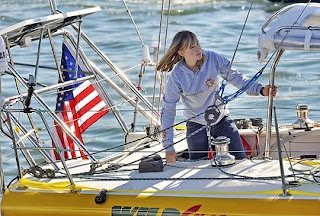 Teen US around the world sailor Abbey Sunderland was spotted from a 'ASMA' chartered Qantas Airways A330-303 VH-QPF msn 595 which departed Perth Airport with 2 x WA Police & 12 x S&R personnel, the striken yacht was spotted approx 3,760km West South West in the Southern Indian Ocean upright but without its mast, rigging & engine disabled. The yacht was battling seas with swells up to 10m & 60 knot winds to stay afloat, Qantas captain "John Carr" who piloted the A330 said he was extremely pleased to been able to assist with the rescue of Ms Sunderland as they flew over & circled the yacht for nearly 2 hours, and had hoped this gave her some reassurance that help was on its way. Flying in support today 12/06 was Avwest BD-700-1A10 VH-ZXH msn 9310 which departed Perth Airport at 10.31hrs & returned back into Perth at 21.25hrs, the French fishing vessel 'Ille De La Reunion' rendezvoued with the 16 years old sailor at 17.45hrs today now ensuring for a safe passage back home to the USA.

The A330 departed Perth at 07.55hrs as QF1350 and landed back into Perth at 21.11hrs (Flight time 13hrs.56mins) costing an estimated $150,000. The aircraft then operated a scheduled revenue service to Hong Kong departing later the same evening.